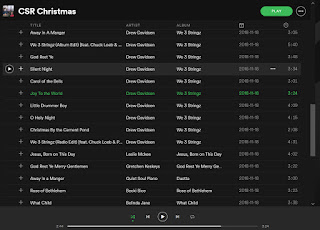 As I have been helping artists create singles more and more the past few years, as well as creating them for our music licensing company Positive Spin Songs, I have noticed that the album isn’t quite what it used to be. In fact, perhaps we need to stop thinking about the “album” or “EP’ at all. Maybe instead, we should look at “playlists” as our new way to collect our songs.

Here’s why I think this way and maybe you should to...

The Evolution of the Album

For over 100 years, we’ve been presenting collections of songs in a finite form. It’s been called a record, a cassette, an 8-track, a CD, and now a digital album. It’s also gone by names like “EP” (which is usually a smaller collection of songs that came from the Extended Play CD releases of the 90s), or “Best of...” or compilation releases.

But what if an album or collection of songs didn’t have to be "finite", or fixed? What if the collection could be fluid, with changed lineups or orders, remixes, reproductions, or new songs that fit the collection?

I recently updated a jazz album from Player A called “Our Own Devices”, and released an EP called “Devices, Techniques, & Mechanisms”. It had new mixes with added beats, replayed parts, and even new songs that were supposed to go on the first CD but didn’t get finished in time, or went on other projects.

If I had been thinking in a “playlist” way, I would have just added the songs to the Our Own Devices Playlist on Spotify and Apple Music. Then sent the new playlist around to social media, email, etc.

I even considered a reprint of the CD, but have so many CD copies in the garage, that didn't seem feasible.

For those of you that worry about sales, you know they matter very little (at least on digital). Unfortunately, online streaming and sales are just not going to pay very much. It’s pretty heartbreaking to tell artists that they won’t be making their investment in recording back off the few hundred or even thousand people who stream or download their music. Unless of course you can convince 1000 people per single to buy a download...

In all reality, we should be focused on people LISTENING to the music. The truth is that the majority of music streamers, or listeners of digital music do so via playlist or suggestion. So we better be putting the versions of songs we want in our own playlists and offering it to people as much as we offer our old album or EP.

For those of you making CDs for gigs, performances, or other live opportunities, maybe think of making smaller batches of 50 or 100, with just the songs you want on the CD. Maybe you update them from time to time. Maybe the art changes, or the songs do. Maybe there are remixes.

For touring artists, this may not make as much sense, as CDs can be new to each new audience. But for artists who play locally and regionally, or the same audiences consistently, they may also want new or different versions. Maybe you make live versions from performances (hey it works for the Grateful Dead). Maybe you have your mixes updated every five years or so, or add a song or remix to the collection.

For artists who tour, what if your album changed slightly every few years, inviting people who had an older copy to buy the new one, or even exchange it for a new signed copy with more or updated material?

Whether it’s just updating your collection, remixing it, or adding new songs, we have to provide constant NEW content to our audiences. This is important no matter what kind of art you make. Music allows us to reinterpret not just other people’s songs, but our own as well.

The Future is Playlists

This idea of playlists isn't just for Spotify or Apple Music, but also for SoundCloud, YouTube, and more streaming and tech that may come out in the future.

Like authors print books on demand, we may print CDs on demand for live sales. These CDs can change with each release.

Some of you may say, "But making a piece of art is just that. If it's the perfect album, why ruin it?"

I probably would have agreed with you a few years ago. But we have to embrace new technology and the way people absorb music. Younger people who listen to malleable, always changing playlists aren't magically going to desire hard copies that are set in stone just because they get older.

I would love your thoughts on this.

Have a great week!

EC
--
Eric Copeland is a composer, producer, and thinker of things that usually make people mad, or think, and probably yawn. Find out more about the things he does at cre8iv.com
Posted by Eric Copeland at 7:39 AM

Our Brands and Labels

Cre8iv Entertainment, Inc.
Our corporate site with links to all our brands.

Creative Soul Records
Our Christian music label featuring artists from across the US and the world.

For the Creative Soul
Our encouraging blog for artists and creators of all kinds.

This is a blog for all of us trying to expose our music brand, find and grow our audience, and make a life making music. We want to find out what really works in music marketing, and what has changed since last week, last month, and last year when we were doing the same thing! Read more...